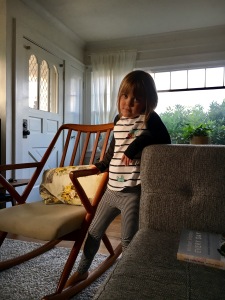 "I hate you. And I'm embarrassed you're my mom."

"We still have to wash your hair."

His insults are genuine and heartfelt. And I twinge. But. The weight of his grief in those words are much heavier than mine will ever be. He's serious. He throws something heavy that I care about. But I have the benefit of remembering the hot rage I felt at my parent's very presence. And the subsequent passing. Hindsight as gift. Hair is a trigger for him and now for me. Cutting it means faster mornings and no arguments. Leaving it means Black Boy Hair Joy and Pride In 'Fro. We will keep the hair and beg the heavens for mercy on the days we need to deep condition.

On Christmas Eve I re-wrapped gifts and listened to the King's Cross Choir and cried.The night before I had come home to a 16 year old runaway in my kitchen and now I was shuffling around gifts and searching in drawers for something he could unwrap in the morning. The child was in crisis and his 6'4" frame hid briefly the emotional and intellectual capacity of someone much, much younger. When he opened a basketball and new socks on Christmas morning he smiled, unsurprised that gifts had shown up for him. Had we bought him shoes, he wondered?! No shoes.The village came through with a PlayStation gift card though. "I am so pumped on this" he said and waved it around in the air as he headed down to the basement to spend it.

He would be with us for three nights. His social worker was on vacation and could not be reached and there was literally no place (save for a shelter) for them to place him. He left our house for a hotel– the solution that DHS is relying on in Portland at the moment. I cried and continue to cry knowing that the number of medications he takes during the day will mostly likely turn him into an addict once he is released from the system meant to protect him. I cried because what we did was so small and insignificant, but it is the stuff that a thousand sermon illustrations are parables are made of. And I cried because I knew he could not stay with us– even as the emergency worker quietly asked us to become certified– because we are barely keeping our own buffered from the storm.

Truly is turning six this week. She has been singing "We Shall Overcome" and pondering the inaccuracies of skin colour as a category. She screams from her room, "MOM THE PERSON WHO SINGS FERGELICIOUS IS WHITE". Her astonishment is also betrayal. She keeps mumbling about it the rest of the day.The books we read to her when she was three and four have woven their way into her understanding of the world as unfair and unkind and in need of people who listen and try to help. I don't think they are bad lessons for her to learn. I would rather her see joy and hope within despair than rely on fairy dust and magic. This is not lost on her either. She chooses the things with the most glitter, the biggest rainbows, and the deepest purples. Her best friend tells her that she cried today at school. "Don't worry, K. I cried at breakfast, too."

So I'm still reading "Stamped from the Beginning: The History of Racist Thought in America" because I'm having to reread parts and take breaks. My god, read this flipping book.

I'll be Grand Rapids for the Festival of Faith and Writing in April… Which is another whole story!I do want to recommend the podcast  of past speakers (Zadie Smith, Jennifer Patterson, Frederick Buechner among them) called Rewrite Radio. They are an antidote to the literary interviews that sometimes skew heavily toward the interviewer. Plus they are hosted by my friend, Lisa. So. Nepotism.