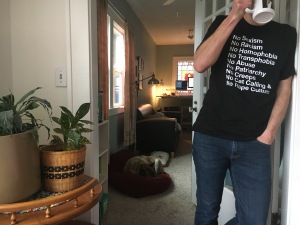 “Never mind, I’m not that hungry.”

“If they try to talk to you on your own, you need to ask for another adult to be present. Or ask to call me. One of us will come straight over. Don’t let them close the door.”

“If they ask you what you’re doing, let Sam or _____ or_____ do all the talking. Don’t interrupt. Don’t give them any more information. Call home immediately even if you’re close by. If something bad starts happening, someone needs to start running home and you need to start yelling for adults to help. Adults will help. Scream if you have to. Just don’t use your hands. Tell them my name. Ask for me.”

I asked Paul how he knew that his dad was wrong about the world. He was raised by a bigot– how is he not one? Or, at the very least, how does he move through the world pulling himself out of line? He boiled it down to three things: attending diverse public schools, becoming fanatical about skateboarding, and listening to hardcore music. Diversity in the classroom meant exposure that contradicted his dad’s worldview. Skateboarding meant he was a part of a culture that made it forcibly uncool to be racist in any way– like, you’d get the crap beat of out of you. So, chalk that up to Peer Pressure. Hardcore and punk were similar in that way, but gave language to this pressure by way of Positive Messaging. If he was to add a fourth, it would be raising Black and White children. The fourth means we get to dig in further to the stuff that he started wrestling with as a Kindergartener.

I was in a meeting the other day and we were discussing some of the challenges our school is facing. Poor behavior from students immediately came up as a core issue. Predictably, parents first made a statement absolving themselves from personal responsibility. “I have really high expectations for my kids. They would never even think to pull something like that.” This is usually (and was in this case) followed by a statement meant to shift the blame to other caregivers and children. “I’m sure those kids have difficulties at home, but I can’t imagine that anyone should be expected to put up with that. They need bigger consequences/to be taught a lesson”.

The parents pointing this out are nice people with nice jobs who volunteer and march and wear pink hats.

And yet, some of the kids that they are raising with these high expectations are the same children who taunt and bully and drive those children to harm themselves and others. These kids that toe the line at home are the same kids who roll their eyes at the adults and whisper insults to their classmates under their breath. Don’t get me wrong– I believe this is all typical adolescent behavior. I don’t think either type of child should be vilified. The problem becomes when the children who are seen in the first category assume powerful roles over children who are cast into the second category. This power structure starts in elementary school, follows kids through their school careers and into their Real Life Every Day Careers. This doesn’t end on the playground or in the principal’s office.This stuff sticks. We are literally raising our White Children to assume power over others by not interrupting common narratives around “at-risk” children (or using that phrase at all), poverty, and what White Supremacy can look like in a Lunch Lady. When we don’t teach our children to think critically and behave emphatically, we are setting them up to repeat the patterns they’ve seen modeled.

Those kids are just bad. And they have it coming. If only someone had steered them in the right direction when they were young.

I am grateful that I’m having lots of good conversations with parents who want to do this work and model it for their children. One of the hardest things to explain to parents of our particular generation is that there is no sweet children’s book, no single self-help tome, and no illustrated rubric to use to guide us or our kids through this work. Dr. Sears did not cover this stuff. Many of us were told to follow our gut when it comes to raising children, that we will know what’s best for them. But man– our guts are wrong when it comes to rooting out bias. Our guts tell us to protect ourselves and our kids at all cost, which means it is imperative to cling to the status quo. Child-centered parenting while parenting a white kid can be flat out dangerous if we do not keep this in mind. This status quo is the one that centers Whiteness as the Expert in Every Room/Theological debate/Board Meeting/Booster Club. It tells your child that the person in his Kindergarten class who has the most power is the kid that performs Whiteness the best. It’s all much harder than that, and we have to think and wrestle and talk about these things in order to frame this for our kids. What I said before about modeling remains the same– YOU HAVE TO MODEL THESE CONVERSATIONS. YOU WILL GET IT WRONG. YOU WILL TRY AGAIN.

Am I shouting? I’m shouting.

People publish really interesting and smart things on the internet for free every day. If we say we do not know where to look, then we are not looking. If you are stuck and need a book, start with Baldwin. If you only read poetry, find Clifton and Giovanni. Read How The Irish Became White. If numbers are your thing, research your district’s behavior data and graduation rates. Dig into how public schools exist to serve all children. Ask yourself if kids are being served in your town? Ask yourself why? Don’t settle for your own answers. Believe that Black Joy is Real, Black Excellence is Real, Black Achievement is Real, Black Wealth is Real, and make sure your kids know this to be true because they have seen it with their own eyes.

We were trying to work through a specific social situation the other day and I explained that situations can shift when you come in numbers. When the boys are out together they come in numbers. This is Positive Peer Pressure. “Set the expectation for inclusion and kindness and if it doesn’t happen you all need to walk. Pretend you’re a union.”

“But what if we don’t WANT to leave yet”.

“Right. Sometimes they have to.” <side eye> “I see what you did there.”

Our children are impossibly smart and impossibly full of promise. They get it when they are given the space and language to get it. I linked to an article about “opportunity hoarding” in Evanston Public Schools. We’ve discussed this issue in very real terms in our parent group. I think we also make this very real choice around “innocence hoarding”– that is (and I’m still trying to work it out)–privilege gives us the opportunity to isolate ourselves and our kids from both experiences and learning about certain experiences. You may never ever have to have a conversation with your child about what to do if they are stopped on the street and asked to show their ID because they probably never will be asked. And if they are asked what they are doing/where are they going, they most likely will not be arrested. And if they were to be arrested, they certainly wouldn’t die. And so we hoard all of this innocence hoping that we will not upset our children, meanwhile we expect Black and Brown children to bear the burden of our children’s naïvete.

Part One. (I’m not going to quote myself because that’s just assy.)

I’m posting this because Police Brutality and Driving While Black is also very real. I cried watching it and you might too. So I watched it again. And I cried again. And I watched it one more time until I could get through it without sobbing because I owe it to my kids to be able to have these conversations frankly and without blubbering. So, let that be fair warning if you’re at work. Please show this to your kids: Black Parents Talk to Their Kids about the Police

Black, Latino Two-Parent Families Have Half the Wealth of White Single Parents This is so important. It derails the myth around equating a specific kind of (perceived or real) hardship with another hardship. You can’t play the Oppression Olympics when the numbers don’t back you up. (If you don’t like my source on this, google will give you half a dozen other places you can dig into the numbers.)

“If current economic trends continue, the average black household will need 228 years to accumulate as much wealth as their white counterparts hold today. For the average Latino family, it will take 84 years. Absent significant policy interventions, or a seismic change in the American economy, people of color will never close the gap.”

Talking about Racism With White Kids—

“If we’re not talking with our children about how race affects a person’s life in the United States and how racism factors into that, we’re not convincing children that skin color doesn’t matter. We’re telling them to figure it out themselves.”

How Today’s White Middle Class Was Made Possible By Welfare I think this is an important thing to understand when we feel stuck in inter-generational conversations about race. Many, many people believe that it was just hard work and sacrifice that built wealth. But we know that this is not true. If your family benefited from the GI Bill, race played a part. If your family benefited from low interest loans and loan forgiveness, race has played a part. Etc., etc.

“Today, the federal government’s role in building and subsidizing the homestead communities—and the larger government programs to subsidize construction of white suburbs across the nation—is all but erased from history. This allows contemporary white Americans to assume they came by home ownership, and the family wealth it produces, through individual hard work. It also sustains their refusal to recognize the ways white privilege—or what W.E.B. Du Bois called “the wages of whiteness”—propelled white workers into middle-class economic stability.”