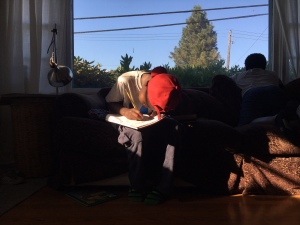 I used to write and hit publish and then go back and fix the typos I swore I had already corrected. I am trying to be more diligent now, but I need a good editor and someone to proofread and then tell me to order my thoughts accordingly. This is an apology to my writer-ly friends who read and cringe and still read. I love you. I am trying.

I came to the United States in the mid 90s on a student visa. It expired with graduation and I decided to stay on a bit longer, working as an occasional nanny and office assistant. My friends were going on tour in the Spring and I could be Merch Girl and then I had a job (maybe?) waiting for me outside of Toronto for the summer. As a student on a Visa, the only legal employer is the institution you are attending. This is the agreement between the government and the private sector and it is a beneficial situation for everyone but the student. The college's wages were exceptionally low– hovering just around the 4.10/hour minimum wage. There is also a limit to how many hours a student could work and of course, there are no tips or bonuses. My fellow international students coveted these on-campus jobs, but we also realized that we were getting the shaft. Our American classmates were waiting tables, valeting, and working in coffee shops. They were answering phones for ad agencies and lawyers. They had access to places we did not and wasn't it enough that we were afforded an opportunity to study in America? Our earning potential was bureaucratically cut.

It was a big city and a kid could easily work for cash and lots of students did. We were fresh faced and bound by a strict code of conduct by our college. Who wouldn't want us shuttling their kids to Hebrew school or fixing weeknight dinners? Is there such thing as being a "little bit illegal"? We worked for bank execs and house sat for philanthropists and politicians.

I have been thinking about this time as someone who is a permanent resident but not currently a citizen. What would it take for my permanent residency to become temporary? A traffic ticket? Maybe a series of them? An arrest during a civil demonstration? Perhaps an eviction? I was told that even if people are cleared of their felonies or misdemeanors that trigger deportation orders, "it will be the civil shit that gets you if you catch them on a bad day". These are within the realm of possibility in my circle, if not immediately personal. The cost of living has skyrocketed, with housing and gentrification leaping to precariously high levels every year. We are, as a family, two or three house payments away from "uh-oh" if we were to lose our ability to earn money. I'm not black so "driving while black" is not a problem I contend with, but maybe it would be by proxy during the times I stop to bear witness to law enforcement pulling over or detaining my Black and Brown neighbors. I am protected by my Whiteness, my access to my community, and my willingness to submit to respectability. I blend in. I am fine. I am probably fine.

I ended up in Ontario late that Spring, working for a rose breeder digging at the still frozen ground while renting a room from an Irish woman who loved listening to charismatic preachers and tut-tutting my late night phone calls to Paul.

My aunt sent me this after I asked her to help with a specific date:

Your Dad’s grandparents Katherine & Wilhelm Fehdrau came to Canada from the Ukraine in 1909.  The village they lived in was a [German} Mennonite village called “New Samaria.” They travelled by sea and arrived in Montreal and then took train to Saskatchewan.  While on their ocean trip your  Grandmother Helen (who an infant 3 months old) became very ill and the ship crew told her Mom it would be best to throw her baby overboard and our Grandmother said, “That will not happen until I see her dead in my arms.”  This was the story my Mom (your grandmother) told me.  Hope this the information you wanted.

She is the keeper of the family history for my dad's side of the family. She does not let things get wishy-washy like they so often do in family histories, with truth and myth running into each other. She told me that my paternal grandfather was born in Kansas, as was his father, shortly after the family had also sailed from the Ukraine.

I have been thinking a lot about becoming a citizen and what that might mean in my family's own legacy of migration. I understand the urge that some people feel when they come to the United States to become a citizen right away so that they can fully participate in a place that they are coming to love. I do not love this country, so that would be tricky. I do not love any country. But I do feel like participation as a citizen is a primary part of the resistance.

I do not know where I will land on this. I am concerned at cutting off my own children's options. And yet I want to throw my entire weight– systemically and physically– against the mounting waves of anxiety and real-life threats to our neighbor's safety. Tonight, there was a rumor that ICE police were stopping busses in outer areas in our county and asking people for paperwork.  We fear Islamic Extremists who storm buildings separating people out by sect or clan. I just… This is out of a dystopian movie. This cannot really be happening. It is only a rumor and yet we believe it because everything seems within the realm of possibility in this time.

The men and women who reportedly handcuffed small children and the elderly, separated a child from his mother and held others without food for 20 hours, are undoubtedly "ordinary" people. What I mean by that, is that these are, in normal circumstances, people who likely treat their neighbors and co-workers with kindness and do not intentionally seek to harm others. That is chilling, as it is a reminder that authoritarians have no trouble finding the people they need to carry out their acts of cruelty. They do not need special monsters; they can issue orders to otherwise unexceptional people who will carry them out dutifully.

If you are unmoved by any of this… It does not really matter how you might have thought or hoped this would all turn out, I am willing you to decide that the impact is not worth the blood you will have on your hands.

Our friend, Andrea, bought us the book Good People Everywhere by Lynea Gillen. We read it often and I hold out hope that those Good People really are Everywhere.