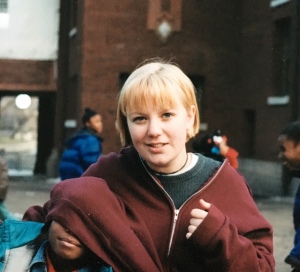 *you come here for the profanity, yes?

After you left the other morning I picked up T at preK, set her up with food and toys and sat down to read your book. I have set my mind to reading (at the cost of housekeeping) as an act of self-care and revolution. Two birds down. And I decided that I liked you so much, that I needed to read the book right away to make sure I was on the right track.

I have not read a book meant for a “Christian” audience in many, many years. At this point in my life I read it the same way I read a book meant for Budhists or Muslims or any other faith system I do not necessarily ascribe to, but I still value. Which, I think maybe we should all do often.

This book– these essays of yours– were exactly what I thought they would be: uncomfortable, relatable, beautiful. Living in concert with refugees or sitting with poverty or claiming it as shared struggle, is something of a Great Reckoning this country will surely face. It should not be left for teenage missionaries or 20 something optimists or tenuously connected non-profits to turn the concept of loving our neighbor into a collective reality. Your upbringing was different than mine, but similar in its earnestness and guiding principles. I twitched reflexively when you write about matching t-shirts and Vacation Bible School fliers and I see myself in Chicago or Vancouver or Kansas City. I’m15 years old, intent on my own willingness to make things better, but blind to some of its absurdity. For what it’s worth– I always like the “doing” projects more. Cleaning? Yes. Digging holes or pouring cement or clearing empty lots? Yes. That spoke to the work that no one wanted to do. That spoke to selflessness and kindness. The rest had always been uncomfortable.

When I had signed up to volunteer with the refugees, I immediately noticed the harried and dazed looks of the sweet-souled people who worked for this charity organization. They were in over their heads. As it would turn out, the Somali Bantu were some of the least successfully acclimated refugees the United States had attempted to resettle. When I met them, fresh out of a decade or so of awaiting thrie fates in refugee camps, many of them had never used a light switch or indoor plumbing, or even climbed stairs. I saw the shock of America through their eyes, and it was very sobering indeed. When I went into the non-profit office to sign up to help, it was not yet clear how difficult it would be to force these resilient and stricken families to assimilate in a culture still besotted with manifest destiny….

…It’s amazing how much I didn’t know, how to this day there is still so much left in the gray. But from the moment I met them, I knew at once that they were not immigrants hewing closely to the origin story we like to tell about ourselves and our country. These were individuals who had been forced by unbelievable trauma to leave everything behind. As Warsan Shire, the Somali poet writes: “no one leaves home unless home is the mouth of a shark / you only run for the border when you see the whole city running as well.” The Somali Bantu refuges I met were polite, they were grateful, they were intent on surviving. But they were not happy to leave their country, fraught as it might have been. I wonder if right from the moment they stepped on the ground, they sensed it: the American dream had no place for them. And yet, here they were.

You detail the ways in which your work changed, the ways that showing up seemed to matter more than any other metric, and your own rationalizing of the Gospel as you understood it to be, toward the Gospel as you wanted to live it. When you were over we were talking about racial equity work and the responsibility of White People to recognize their own Culture. I mentioned how far I had seen people move when they 1. were in relationship with others who they did not share a common past with 2. allowed themselves a pass to get it wrong one or one hundred times and to feel the shame and then move through. You asked if I thought this was possible for Christians.

You said that your publishers mentioned you missed the mark on the general Christian audience but that “nice church ladies” were receptive. I think I know why. First, I think that church ladies were relieved to hear that maybe by cooking and sharing meals and going about their business in their professions or by being involved in their communities, that maybe they can dig deep into living in faith without the burden of proselytizing. Perhaps living their best lives and building relationships within their circles of influence was the way they could Show Up and Show Love. I think women have seen this side of what The Church is capable of for a lot longer than men. They have often missed the mark, but they know it’s there. This is not the way of the church though, and so congregants continue to sit in fear, paralyzed by the belief that they are being singularly persecuted, and lay no claim to the role of persecutor. And I think you missed the mark with the rest because they are not ready to claim their stake in this mess. They are not ready to calculate how ignoring social and racial justice is costing them our shared humanity.

When I listened to the impassioned speeches on the National Mall from my couch in Portland, I heard what I wished I heard from the pews I spent years sitting in. Tamika Mallory spoke/preached:

I came here to address those of you who say you are of good conscience, to those of you who experience a feeling of being powerless, disparaged, victimized, antagonized, threatened and abused. To those of you who, for the first time, felt the pain that my people have felt since they were born here with chains shackled on our legs. Today I say to you, welcome to my world. Welcome to our world. I stand here, as a black woman, a descendant of slaves, our ancestors, literally nursed our slave masters. Through the blood and tears of my people we built this country. America cannot be Great without me, you and all of us who are here today. Today you may be feeling aggrieved, but know that this country has been hostile to its people for a long time. For some of you, it is new. For some of us, it is not so new at all.

Point me in the direction of her church.

And here is your gift, I think. You are a translator. You speak in a language that people in churches understand. This is the work of this book for all of us, regardless of our belief systems– to explain what is lost by not showing up, what we have missed, not giving ourselves a pass, not opening ourselves up to the idea that we may not have a corner on the Whole Truth Market. We need to be reminded to care about the deepest parts of our shared humanity. I don’t know how in the WORLD, so many people are standing by and letting a literal monster take a part this corner of the free world. But they are. And folks like you can explain how and why we should care.

I told Paul after you left how I believe that Jesus lived in a constant state of conflict– he didn’t seem to mind. People were always telling him to be respectable. Build capital. Abandon this quest to love the dying people and the sex workers and the homeless. I wonder if churches spent less time wrestling with their internal conflicts, misunderstandings, and finer points of theology, and spent more time digging in to the work of showing up, might they come closer to being what he was all about.

“If the Church the same Zero Fucks that Jesus did about existing within conflict, I’d think about going back”. He said we should get that on a t-shirt.

You may want to rethink this friendship.

And then you wrote:

If I were a person of mercy, I would treat each student like a prophet, reverent and grateful. I would not be so hopeless; I would not write this all out. I would hide the beautiful flame that flares up and then hovers, nearly extinguished. It would not feel like the world is an endless river, that all I can do is sit on the shore and touch the bodies as they float on past.

My friend and I were discussing the admonishments she was receiving from friends/acquaintances asking her to tone down our rhetoric around the women’s march or liberal ideologies on social media. They were from men who she knows through her work as a preacher and a teacher. They are hung up on abortion and a woman’s agency (or lack thereof) over her own body. She herself works at a Direct Service organization as a case manager. Her clients are the very people who have run out of places to go to for help. How does that work? Take a seat gentlemen.The paltry safety nets we offer do not even come close to meeting the needs of the mothers and the babies that we so desperately convinced them to have.

Oh, see, I took a quick detour. But I hope you’re following. You are allowed in places I don’t have any desire to enter. You can see the real crimes we are committing while the church argues in circles with itself. You have the gift of generosity and kindness. You can, like my wonderful friend, argue the apologetics and the technicalities of love. You can translate the cost that we are paying into terms the people will understand. You have already started.

Please check out what it takes to get into this country as a refugee from Syria or Somalia. Think about your children. Your cousins. Your brothers and your sisters. Ask yourself what you would do if there were in a place so ravaged and wrecked, they may not survive. Then ask your government officials to do better. They can and they are choosing not to. We will be on the wrong side of history on this one.

White, Conservative, Christian Friend, I Wish You Really Were Pro Life  (When you google John Pavlovitz’s name, “John Pavlovitz False Prophet” is one of the prompts. We should all be so lucky.)

Begin throwing money at your local Refugee Resettlement Organizations (google one in your neighborhood) and legal defense funds/legal aid folks who aid those at risk of deportation. The reckoning is coming, friends. It has already begun.