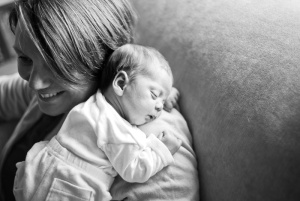 This is a partial retelling of five years ago but if that grosses you out, just skip ahead to the stars.

There were some minor complications during my pregnancy with her. I had this strange thing called gestational cholestasis which meant I itched, horribly, from the evening hours until 4 or 5 in the morning. The itch would come through the palms of my hands and the bottoms of my feet and across my legs. Welts rose up down my arms from the scratching. I had indigestion and restless leg. Persistent sickness (what we found out to be gall stones) put me into the hospital before Christmas with big contractions. This was where they also realized my thyroid was out of wack and making my heart rate soar dangerously high. At home, we were having our basement redone to accommodate a guest room, and days before she came I set about repainting and moving rooms around upstairs to distract myself from the itch and bring on labour. The cholestasis meant I had to somehow get myself ready to have her three weeks early. If I could start labour without chemical intervention or deliver without a C-section, they could take my gall bladder during the same hospital stay.

The night I booked into the hospital, my friend Annie and Stephanie sat with me while they hooked me up to monitors and set about trying to mechanically dilate me further (don't ask. It's terrible). Paul put the boys to bed and then came to sleep on the window seat. I did not sleep. The contractions were painful and steady. I was still itchy. I worried I would not be able to push her out as I had not been able to push out Sam. She was facing the wrong way. I could feel it. It started to snow.

Early the next morning I was far enough along that they could break my water. When she was ready to come, I asked the nurse how I should be pushing– I did not think I was doing it particularly well. I gripped the mattress and tried to pull it around my body. I tried not to make any noise. Just after noon she came out, facing the wrong way, painful as all hell. I shook uncontrollably. The nurses laughed at how it had all come together so quickly once I figured out what to do.

I would have my gall bladder removed the next day. It was a ridiculous move considering– and definitely something I would not recommend unless you already have three small children, a basement full of contractors, and a husband who has no paternity leave (in which case, yes, by all means, try surgery less than a day after a baby). I scrubbed myself down while I called Paul to tell him what was happening. I would be back in the room three hours later, just in time to nurse her.

She would be the baby we all needed and wanted, a tiny 6 lb something with dark hair that eventually all fell out. She had no profile to speak of, massive eyes, and moved like a muppet. She hated the car seat and looked like a beet in pink. She would never learn to properly crawl, but would place her left leg out in front of her and use it to pivot her bottom forward. She mastered walking up and down stairs refusing any kind of assistance, terrifying passerbys. I fought my own body to nurse her.

She has a fever today and is curled up under covers on the couch flipping her fingers in front of her face. She is making up stories and stating them as gospel truth. Paul is her favourite person. (He is everyone's favourite.) She is desperate to go to school tomorrow and is complaining that in PreK you do not really get homework. She wants to see her best friend (her words) who has a mom that I'm lucky enough to call my good friend.

She is a small, white, girl and I do not know where to start with undoing all the things she will be conditioned to believe. The first five years were easy. I want her to learn how to feel safe without having to teach her how to be afraid. I want her to know what fragility looks like, and then learn how to swallow it hard and move forward. I want her to be the kindest and the wisest in the room but not at the expense of anyone else. I do not think these things will come naturally to her. I do not think these things come naturally to most of us. My friend jokes that a guy won't be able to look at her sideways for fear of being beat down by one of her brothers. I take some comfort in that and remind "her boys" that one of their only jobs is to look after people who are smaller than they are. And who will she look after, amplify, and partner with?

She will come from a multi-racial family. This will not be enough.

I am watching women I know grapple with Intersectionality and Racism. As we are leaning into keeping each other accountable, my friends and I are often hamstrung by our emotional response to being called out by women of colour. I resist it even as I live it. Never am I more grateful or more nauseous when I am called out by Black friends. Our parents and our grandparents may have marched, or sat in, or protested. They thought they had this figured out. And then, as it so happens, they did not dismantle the systems that kept them and their peers holding most of the power. Their personal sacrifice and discomfort was nearly lost on future generations. We were not taught the language of resistance and we were not shown what it meant to take ourselves out of line without losing our dignity or our fight. We were not taught how to hold all of it in a single hand: We are the oppressed, as we are the oppressor. We are victimized and we victimize others. It is excruciating to face and we must still face it.

Tru threw up a little while ago. She has accepted she will miss school. She's fallen asleep propped up on the couch clutching a small bowl. Her fever dips. I will sleep out here with her, trying to hug onto my end of the couch as her nearly five year old legs try to shove me off. She is the person that our family needed. She will do better than I have done.

An Intervention for White Women