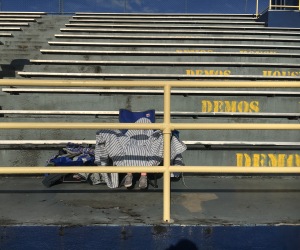 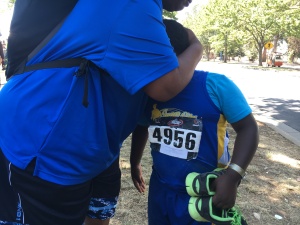 March is My Month. Daffodils come up (the sisters excelled at bulb placement). The weather is completely unpredictable (exciting!). I start big plans for outside living (that never quite come to fruition). Track and Field starts for the Framily. 2016 would be our second year of devoting all of Spring and half of summer to water bottles, running spikes and Saturdays baking in the sun/getting soaked to the skin watching the boys run, jump and throw their way to the USATF Junior Olympics. In 2016, two of the boys would make it.

Track was one way we decided to expand our circle two years ago. We joined a club that had been dormant for a few years and was starting back up again. August has always been a fast runner and we figured this would be a good outlet. Sam did not want to be left out and so he joined up during the first practice. In March, all five boys registered. What the club lacked in organization they made up for in dedicated coaching and trial-by-fire competition standards. The coaching staff and most of the team are Black. Most of my kids are Black. Yes Please and Thank You.

(Way to make it about Race again, Melissa)

Here is the thing: when you get ready to adopt a kid that is a different colour than you, most good agencies will take you through a life checklist to see if you're preparing yourself in ways you might not expect. "Do you have people in your circle that reflect the race/ethnicity of your child? Do you have access to culturally specific events/experiences that reflect your child's birth culture? What will you do to insure that your child is not isolated by race/ethnicity?" If you are answering No to these things you either need to change your life OR you have a giant ego and believe that your super power love will be enough to prepare your kid to be <whatever colour that is not white> in America. We had filled out that checklist with some trepidation and were pretty aware that we were going to have to make a conscious and concerted effort to be a part of communities where we might not fit. This would be harder and easier than we expected.

Choosing public school in our fairly diverse neighborhood was a no-brainer. Gentrification was just beginning to really take hold of our neighborhood right around the time Sam was born. By the time he started school, the demographic shift was obvious. Still. We didn't realize right away that while our (Black) kids were choosing to play with children who looked like them, parents segregated themselves, and as such, the kid relationships didn't extend past the bus ride home. If my kids were going to spend time with families who looked like them, Paul and I were going to have to do the uncomfortable work of proving ourselves trustworthy amongst black families. It was going to look like attending events where my kids fit but I didn't. It was going to look like a whole lot of side eye at Birthday Parties and BBQs where people politely wondered why I was showing up in Black Spaces. I was going to have to ask for play dates for my kids and drop them off at the door without hovering. I was going to have to chase down folks in parking lots asking for numbers while looking foolish.That's not to say that we didn't have great family friends or that my children weren't invited over to their classmate's homes. But it began to feel like they were the object of tokenism– their proximity to whiteness (me) made them safe playmates for white children. My kids noticed. My kids had no choice when they diversified our family. And now they were inadvertently being asked to do the heavy lifting of diversifying others.

This was also going to look like me walking around like one big social gaff after another.

There are a higher-than-average number of kids of colour at their school who have been adopted by white parents. This is a great thing in so many ways. Our family is not anomalous. But it became clear that proximity to (a caregiver's) whiteness was the common denominator in social circles. It was certainly not malicious. I don't think it's even intentional. It just IS.

That is how systems that Center Whiteness are built, by the way. If you were wondering. And we are not here for that.

So. I chased down parents in parking lots and sent awkward texts. We joined track. And it was good. I said un-thinking things and I got my feelings hurt. I watched my kids live out their Best Selves under the direction of caring and compassionate authority figures. I deferred to their instruction.

I turned 39 and I made a list of all the ways in which my whiteness got in the way of living and then I stumbled forward making mistakes and asking for forgiveness around every corner.