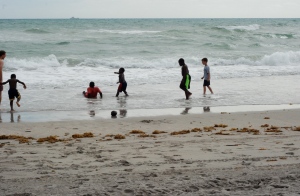 Paul and I had hoped for what the adoption industry refers to an "open adoption".

Let me rephrase that: we always hoped for what we thought the adoption industry meant by open adoption. What we quickly discovered that most "open adoptions" are not really open at all. While families may meet each other or parents relinquishing their children may choose or interview an potential families, they may never know which state their child ends up in or what the adoptive families last name is. Most of the time communication is handled through the agency. Often agreements are made about how many times a year families are to send pictures or updates. Of course, it all hinges on good will and intention of the adopting family and none of it is really enforceable. Many times these updates are only expected for the first few years, or requested only once a year until the child turns 18.

Many families adopting infants feel safer with these parameters. Sometimes, it is our unexamined insecurities over the perceived legitimacy of the family we are attempting to build. Or, maybe it is our discomfort with the potential role that our child's bio family may play. At any rate, many of us welcome these guidelines. While we speak with great warmth or respect about our child's bio family, we are careful to not to push towards an actual relationship. To be fair, many bio mothers and fathers have their own feelings about desiring (or not desiring) a relationship, and sometimes the safety of the child is a factor. It is never simple. I know that. BUT. But. More often than not, it is the agencies setting these parameters for the relationship in order to reassure the adoptive family that they are in control, or to minimize the grief and loss inherent in these situations. Obviously, there are exceptions. Many agencies and states are working to discourage anonymity. Some families are able to see their way through their own stuff to find a healthy way of including part or parcel of their child's family. Even so, the more I've read and researched and lived, the more uncomfortable I am with what adopting parents have become accustomed to accepting. Domestic adoption is not the cloak and dagger secrecy of decades past. But sometimes– specifically in the case of infant adoptions– it doesn't feel like we've come far enough.

The out-of-state folks that facilitated both our adoptions were both pragmatic and empathetic. We have checked in with them over the years and J has told us that she felt like she was treated with compassion and honesty. We know other folks who have worked with them and have felt the same way. Still, we had to push through the status quo in that first year after Augie came home. While J had specified the type of communication she wanted, she had been advised by them as to what was "typical" and they cautioned us against providing too much identifying information initially. And while I understood their rationale for our particular situation, we let them know that we would like her to know as much as she wanted as soon as they felt it was appropriate. We talked it through. We understood the risks. Even then, I think we loved our kids enough to know that Paul and I would probably never truly be enough as they got older.

I want to talk about our feelings about openness and our reasons for desiring it in more detail, but for now, let me just say that our desire for each of our kids is that they have the best chance possible at feeling Whole. There will be plenty of unknowns in their lives, but there are also plenty that is known: including living, breathing, people that love them and know them as their flesh and blood. It is complicated (and I ask you: WHAT FAMILY ISN'T??) and heart breaking. It is also beautiful.

Which brings me to now and a trip we had been saving for and planning for a long time.

The six of us flew to Florida to spend precious time being in the same space as their living, breathing, loving flesh and blood. It was an enormous privilege. It might prove to be the best decision we ever make. I learned that 98% (conservatively) of who my kids are is related entirely to nature and that the nurture part of their being is merely a bonus. Turns out all the crap I've been trying as a parent… well… I can just stop now and live a little. They are going to be fine. We have always considered these people as a part of our family, but it is now something more than theoretical.

We are home now. Changed. I am wrecked. My kids are wrecked. The grief is palpable. But (and again, I say BUT) we are also closer to being whole and seeing our way through to something better.